[New Artisans of Japan] The Artisan in the Machine – Takeshi Fukuda, Maker of Metal Materials – 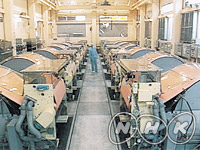 The circuit boards which lie at the heart of devices such as personal computers and mobile ohones are criss-crossed by numerous fine lines. These are the lifelines connecting up the various electronic components which together make up large-scale integrted circuits. The copper foil used to make these lines is extremely thin - 35 microns to be exact. 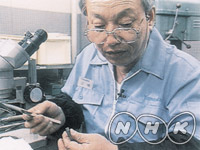 As technology has advanced, many firms have had to adjust by developing new products. One such company in Kyoto has switched from the manufacture of metal molds for automobile parts to high-precision molds for integrated circuits. Mr. Ebata's job is "mirror polishing," and he employs a wide range of tools, including willow wood and bamboo skewers. His skills in precision processing are essential, and it's just one example of how skills from an earlier era are now being employed in new, cutting-edge technology. 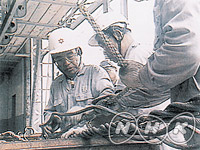 Mr. Ugajin (74) and Mr. Suzuki (72) are among only a handful of people in the country who possess the skills and experience necessary to braid steel cables - used in construction of massive bridges and ski-lift equipment and requiring a high level of safety - into continuous loops. This work is done manually as it requires a sure hand and a well-trained eye that machines do not have. This episode focuses on these two senior citizens as they pass their skills on to the next generation of cable braiders.