Rival or Not Rival? 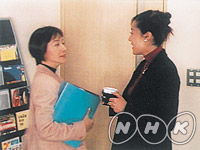 Two career women are rivals at work. However by chance their relationship changes to that of sisters-in-laws. The six episode drama series presents a romantic comedy.

Episode 1: Fall in love
Episode 2: Are we still to many?
Episode 3: Sister-in-law vs sister-in law
Episode 4: Dangerous two
Episode 5: They are obstinate
Episode 6: Stand by me