HOME > 27th JAMCO Online International Symposium > Core Issues of Deliberations on the Future Shape of Broadcasting:
The Discussions from the Second Half of 2018 to January 2019

The Future of Television: Japan and Europe

Core Issues of Deliberations on the Future Shape of Broadcasting:
The Discussions from the Second Half of 2018 to January 2019

The period from the second half of 2018 to January 2019 also saw considerable shifts in policy trends for a future vision of broadcasting. The Ministry of Internal Affairs and Communications’ Commission on Questions Related to Broadcasting (hereinafter referred to as the Commission on Questions) discussed a three-pronged reform of NHK, viz. constant online simulcasts and other online services, NHK’s receiving-fee arrangements, and NHK’s governance, while moves to amend the Broadcasting Act to allow for online simulcasts reached a critical phase. Moreover, debate got underway in November concerning the future of local commercial broadcasters, chiefly from a business perspective, in the Study Group on Enhancing Broadcasting Infrastructure (hereinafter referred to as the Infrastructure Study Group) that was set up by the Commission on Questions. In the following month, a second set of recommendations was published by the sub-committee inside the ruling Liberal Democratic Party concerned with amending the Broadcasting Act (hereinafter referred to as the LDP sub-committee), which urges an “active reorganization” of the local commercial broadcasters. The Infrastructure Study Group is expected to take up and discuss these recommendations.

The biggest shifts concerned NHK. Table 1 shows the major policies regarding NHK in the period from the second half of 2018 to January 2019. Let us make use of this table to note the major trends. 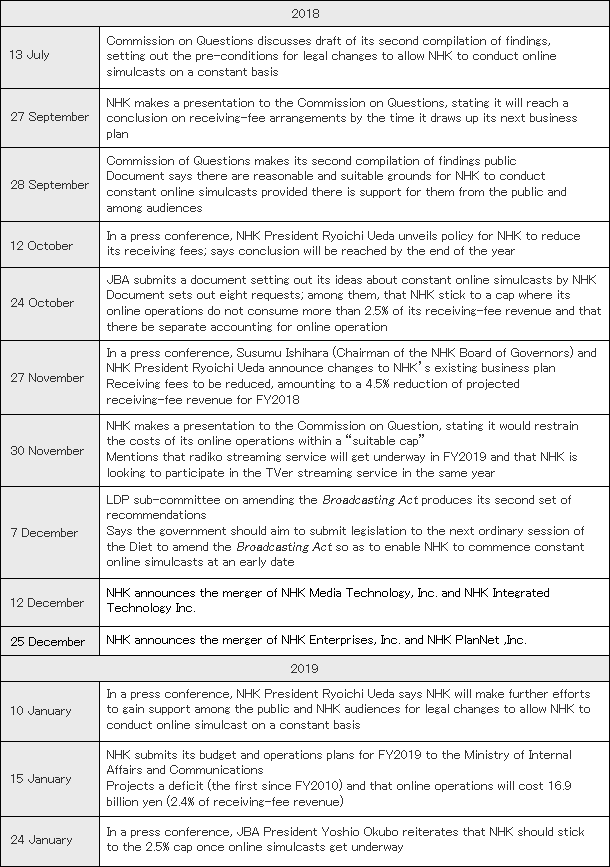 The second set of recommendations from the LDP sub-committee in December 2018 said that the government should submit a bill in the next ordinary session of the Diet to amend the Broadcasting Act to allow NHK to conduct online simulcasts on a constant basis. In the following month, the President of NHK, Ryoichi Ueda, reiterated in a press conference his desire for this legal change. NHK is looking to commence online simulcasts in FY2019 (April 2019 – March 2020). The second compilation of findings from the Commission on Questions, however, set out eight requests from the Japan Commercial Broadcasters Association (JBA), which, the JBA maintains, should be pre-conditions for the legal change. All sides have shown that they want thorough disclosure on the part of NHK, reforms to the way in which is it governed, a review of all of its operations, and a review of its receiving-fee arrangements. And the JBA has been more specific, saying that NHK should make its online operations transparent through separate accounting, stick to its cap for online operations not consuming any more than 2.5% of NHK receiving-fee revenue, and that there should be regional controls for online simulcasts, and that NHK should collaborate with the commercial broadcasters in online streaming.

The biggest request is that the costs for online operations should not consume any more than 2.5% of NHK receiving-fee revenue, even after online simulcasts have commenced. NHK’s response to this was to tell the Commission on Questions in November that it views online simulcasts as important part of NHK operations, both in terms of quantity and quality, and that the simulcasts would be an addition to its existing operations. It said it would try to restrain the ensuing costs by keeping careful track of them within a suitable cap. However, the JBA again asked that NHK maintain the 2.5% cap, a message that was subsequently reiterated in a January 2019 press conference by the JBA President.

In that month, NHK told the Ministry of Internal Affairs and Communications that its budget in FY2019 for online services would be approximately 16.9 billion yen or 2.4% of receiving-fee revenue. But if simulcasts start, it estimates that they and a catch-up service for them would cost around an extra 5 billion yen per year, excluding the costs associated with copyright clearance. NHK says there would have to be a considerable scaling back of existing online services if it were to stick to the 2.5% cap. There is also the cost of NHK taking part in the TVer and radiko streaming services. Once the Broadcasting Act is amended, NHK would conduct simulcasts with the permission of the Internal Affairs and Communications Minister following changes to the existing online standards and public comment. There are likely to be specific talks on the 2.5% cap again once the online standards are changed following the amendment of the Broadcasting Act.

In November 2018, NHK unveiled a policy to reduce its receiving fees that would amount to approximately 4.5% of its projected receiving-fee revenue for FY2018. It gave a number of reasons for this, including the likelihood of NHK securing greater-than-expected revenue from the solid growth in receiving contracts following the December 2018 Supreme Court decision, which said NHK’s system of receiving fees is constitutional.

A reduction in NHK receiving fees did not appear out of the blue. The first set of recommendations made public by the LDP sub-committee in September 2015 said that the Ministry of Internal Affairs and Communications and NHK should conduct simulations as to how far the fees could be reduced as a result of more people paying them from being made mandatory, and from reductions in the collection costs; and it moreover wanted NHK to draw up plans concerning reductions.

The first set of recommendations asked the Ministry of Internal Affairs and Communications to design a system of receiving fees best suited for Japan. A study panel on NHK’s receiving fees, set up as a permanent advisory body to the NHK President, produced a set of recommendations in July 2017, which said there were reasonable grounds for aiming for a model similar to that of the BBC in Britain, which also asks people, who do not possess a TV set and who only tune into the online simulcasts, to share in the costs. But the discussion subsequently came to a halt and has not moved on from there.

In an interview on 25 January 2019 with Kyodo News and other news organizations, the NHK President Ryoichi Ueda said that the details of any new system of receiving fees would be sorted out once there is support among NHK audiences and the public for creating one. How and when might such discussions begin once the law has been changed to allow for constant online simulcasts? And will it concern itself solely with NHK’s receiving fees, or go beyond NHK and lead to a redefinition of broadcasting in an age of convergence between broadcasting and communications? We have yet to see where the debate is heading.

In December 2018, NHK announced the merger of two of its subsidiaries as part of a thorough overhaul of NHK affiliates, which is an important item in reforming governance. A new company was being created by merging NHK Integrated Technology, Inc., which had been plagued by numerous scandals, with NHK Media Technology, Inc. Greater efficiency and transparency is likely to be expected of it.

The second set of recommendations from the LDP sub-committee provided a road map for the future of local commercial broadcasting. Let us touch on this as well.

The recommendations foresee a shift from a time when 122 firms were competing against one another in the catchment areas to an era of integration and mergers. At the time of writing of this article (mid-January 2019), they have not yet been published on the LDP website, so let us note them down in a little more detail for the sake of the record.

An awareness of the issues is outlined in the outset of the recommendations:

“The present nationwide networks of TV stations were built up as a result of moves among commercial TV stations in the 1960s to set up networks, and from the policy of the then Ministry of Posts and Telecommunications (the present-day Ministry of Internal Affairs and Communications) in the 1980s to have four commercial networks for the whole of the nation. [ . . .] This arrangement could be said to have created a flow of information from Tokyo to the regional areas and a hankering for the metropolis, which contributed to our country’s development. Nevertheless, the deleterious effects of the over-concentration on Tokyo, the clamoring for regional regeneration, and the rapid fall in the population and the birth rate, as well the technological innovations of the internet and so on, are transforming economic and social structures and everyday lives to a considerable extent. Breaking free of the old, existing social systems is a matter of urgency; commercial television is at a major turning point as is the case with local government authorities, regional banks, and universities. ”

This awareness of the issues is convincing for this author; nor are the commercial broadcasters likely to object to it.

The LDP sub-committee went on to make eight recommendations to the Ministry of Internal Affairs and Communications and the broadcasting industry, asking that they be acted upon without delay. The words “reorganization” and “active reorganization” are conspicuous in the text; the latter is used twice. Though looking at the Commission on Questions and the Infrastructure Study Group in January 2019, there does not seem to be any discussion getting underway on policies to help local commercial broadcasters improve their capabilities for producing content.

How far will the Ministry of Internal Affairs and Communications take on board and examine the urgings of the LDP sub-committee, which is advocating “active reorganization”?

It is not hard to imagine the great difficulties in drawing up and determining a vision for the future in the midst of a sagging economy compared to deciding on policies for more TV stations when the economy is growing. Accordingly, we need discussions that will look at the overall picture and take a long-term perspective, which would first look at how to orient policies for broadcasting at this major turning point, and what shape the local media should take in local communities in the future. One hopes that the Ministry of Internal Affairs and Communications, at the very least, will not be afraid to provide a place for such debate. One expects the same of the members of the Commission on Questions as well. The debate in the Infrastructure Study Group has only just begun, and it will be followed closely.

Joined NHK in 1992. Director of such programs as NHK Special and Close Up Gendai in the NHK News Department, moving on via the Radio Program Center to take up her current position in 2010.

Conducts coverage and research in the future shape of television with the fusion of telecommunications and broadcasting, what disaster-related information tells us about the new information environment and society, and the role of the media in new public spaces in relation to policy-related decision-making processes and problem solving.