Small Journeys The Umbrellas of Gifu -The Essence of Craftsmanship- 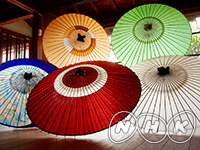 The Small Journeys series focuses on the regions of Japan and the lives local people. In this episode we look at the umbrellas of Gifu; traditional craft products that are painstakingly and skillfully made from bamboo and washi paper.

The area surrounding Gifu City has been Japan’s premier umbrella-producing region ever since the Edo Period (1603-1868). After WW2, however, output shrank to a mere fraction of the peak as Western-style umbrellas became popular, and today the traditions are under threat.

Nevertheless, a few individuals continue to sustain Gifu’s craft heritage. One is a 70-year-old man who produces “runners,” the complex wheel-shaped parts connecting spokes to the shaft. He is the only runner artisan in Japan. Another is a woman who specializes in umbrella assembly. Captivated by the beauty of Gifu’s umbrellas, she spent 10 years perfecting her craft while overcoming opposition from traditionalists. She hopes to keep the tradition alive, to pass on to her young son’s generation and beyond. The Umbrellas of Gifu is a moving story of superlative craftsmanship and deep pride in local traditions.