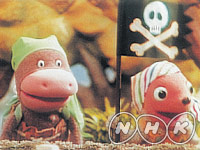 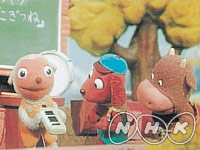 There is nothing so entertaining or educational for children as a puppet show. Parsley Playground's cute puppet characters all have something that a young audience can identify with and the situations they get involved in are all familiar ones. Set in Parsley Elementary School, each story is interesting, educational, and fun. This series is intended to add a little zest to those first few years of school life and to help kids learn how to get along with family and friends - but adults will enjoy it too.

Japan : The Inside Story | Hidden Treasures in Ginza

This light-hearted but informative program gives us a look at Tokyo's equivalent of Fifth Avenue: Ginza, home to shops and restaurants as exclusive and luxurious as any in the world. Among the hidden treasures known only to discriminating insiders are the Kiyota Sushi shop where there is no sign and a single meal may cost as much as $500, a traditional clothing store where only perfection counts, a master craftsman who works with gold leaf, and a modern-day geisha.

Japan : The Inside Story | The Artistry of Japanese Cuisine

The basic techniques of Japanese cookery are slicing, grilling, deep-frying, and kneading, but - as this mouth-watering program shows - it is all a matter of taste. The chef at the Imperial Hotel attributes his mastery of French cuisine to skill in slicing; for the owner of a Kyoto restaurant the essence of traditional cooking is grilling; tempura cooks say their art lies in the deep-frying; and dumpling makers testify to the importance of kneading and grinding.

Japan : The Inside Story | To Be or Not to Be Japanese

This program deals with various examples of Japanese racial prejudice. The cases include a man of Greek birth who has become a nationalized Japanese citizen but is still regarded as a "foreigner" by most other Japanese; a Japanese rakugo artist of mixed ancestry born and raised in Japan with the same problem; and a South East Asian refugee who has lived here for fourteen years and is refused citizenship because his daughter is caught riding a motorbike without a helmet.

Japan : The Inside Story | Sleepless Nights in Tokyo

Like many large cities, Tokyo never really sleeps. This is a city whose night people are as various as they are interesting: there's a locksmith who makes house calls; a man who posts signs - illegally - under cover of darkness; a couple working the night shift to pay off a debt; a young man working his way through school by waking up limousine drivers; and a restaurateur. The program also shows a late-night florist, a bookstore for night owls, and an after hours public bath.