The Swimming Wheelchair ～Ten Years with the Ocean“Fun-ologist”～ 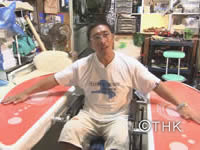 Ocean “fun-ologist” Masamichi Hayashi has for the last ten years been making life like robots of aquatic creatures to teach children about the wonders of the ocean. As a child,Hayashi always played in the ocean, and as a young man, he studied oceanology; the ocean was his everything. However, Hayashi was diagnosed with lung cancer about a decade ago. Although his cancer robbed him of his ability to swim with the dolphins,Hayashi discovered a new passion to create robots of aquatic creatures with trash.
Despite his own deteriorating health, Hayashi traveled from city to city, cheering up sick children with his robots, even developing a wheelchair that can move about freely in the ocean for wheelchair-bound kids. Finally, Hayashi successfully took such kids for a swim in the seas of Okinawa. However, after a decade of such work, Hayashi abruptly announced his retirement. Watch to find out why.