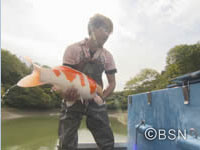 The Yamakoshi District, in Nagaoka, Niigata Prefecture, is the site of over 1600 mud ponds, where Nishikigoi originate. Out of hundreds of thousands of fry the most promising in color and form are selected to swim for a few years in these mud ponds, in the midst of nature, to grow into large beauties. In the autumn, people from around the world gather in Yamakoshi. The popularity of Nishikigoi outside of Japan was triggered by a certain Englishman. What is it that he finds fascinating about Nishikigoi? Learn about the thoughts of the growers who carry on the traditions of their forebears, and about their passion to create superior koi.

We Are the Iron Masters 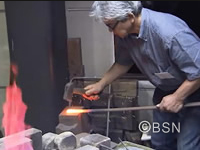 Tsubame-Sanjo in Niigata Prefecture, Japan is a metalworking region that is making a name for itself internationally. "Made in Tsubame-Sanjo" has come to stand for new and innovative products manufactured using traditional Japanese handmade metalworking techniques.
Master knife-maker Tsukasa Hinoura of Sanjo City is a veteran 60-year-old craftsman whose exquisite knives have been called works of art. He is one of Tsubame-Sanjo's community leaders. Recognized internationally for his skills, Hinoura was invited to Austria to demonstrate the masterful techniques of a Tsubame-Sanjo knifesmith.
Another Sanjo City metalsmith, Teruyoshi Uchiyama, the 59-year-old president of a metal-casting firm, is reshaping his company's future by setting a new standard for thin and light enamel-coated cast-iron pots. His company's ultra-thin cast-iron pot garnered a "Best of the Best" Red Dot Award, a prestigious award from Germany for excellence in product design.
These metalsmiths who compete in the world market based on the superior quality of their products provide an insightful look into the spirit of "expertise in manufacturing" passed down through generations of craftsmen in the Tsubame-Sanjo region. 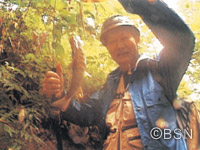 Shinzo Igarashi, known as the "Char Man," is dedicated to hooking the Nikko Char sport fish. But he prizes his catch neither as a meal nor a trophy. Instead, the 68-year-old Igarashi carries the char in a tank on his back to the isolated source of a mountain stream. There he releases the fish, an endangered species, to multiply in safety.