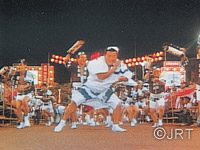 In this fascinating study of the roots of Japanese cultural diversity, dance researcher, Eiji Hinoki, journeys south to investigate the dances of Kyushu. While the famous Awa-Odori folk dance of his native Tokushima in Shikoku has much in common with the folk dances of Japan's southern islands, its three-beat rhythm is unique. Hinoki believes that the Awa-Odori probably originated in the Amakusa region of Western Kyushu through contacts with fishermen and merchants.