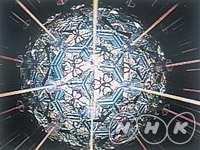 We remember, in our childhood, we were fascinated with the unexpected beauty we find the moment we looked into the kaleidoscopes. Today, kaleidoscopes are recognized as an art from in many countries, and particularly in the United States, they are often used for medical instruments for healing people. Koji Yamami, a professional kaleidoscope maker, won the Grand Prix at the kaleidoscope convention held in the US in 2001. 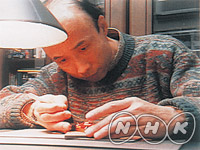 Matsuyoshi Hayakawa is a professional model builder. Today quite a few people make miniature models for pleasure. There are hundreds of varieties of model car kits sold by European makers. Hayakawa starts with such a kit, but he never uses parts without giving them some adjustment and makes most of the parts by himself to create his original car models. He wants those parts to be more precisely. People are fascinated by his artistic sense of the work. 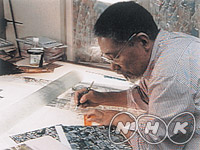 Tadashi Ishihara is a bird's-eye view artist, well-known in Japan for his presentation citymaps. His first work, 'World Expo Japan Aerial Map 1970', created a sensation among people. With preparation of thousands of aerial photos and street level shots, he draws almost everything in his maps exactly as it is down to the number of trees, floors and windows of the buildings, the patterns of white-lines in the parking lot.

Masterly Skills | Chiming in the Wind 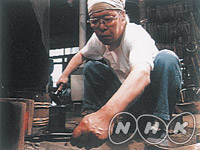 Munemichi Myochin is the 52nd generation master of the Myochin family, which had enjoyed great status since the 8th century because of its armour-making skills. Today he is the only person in Japan who specializes in making iron tongs. His tongs are not only used for tea ceremony but also for a wind chime that tinkles beautifully in the breeze. Tongs do not produce clear sound if there is even one millimetre of difference both in length and thickness. 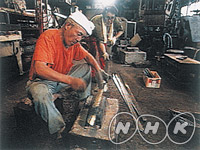 The tuna-filleting knife to carve large tuna with the weight of 200 kilograms, used in the Tsukiji fish market in Tokyo, has a blade length of 1.5 meters. Masaji Shimizu, a craftsman who lives in Takefu in Fkui prefecture, makes this kind of giant knives. The giant knife looks like a huge Japanese sword, but actually it has a tremendous flexibility. It has to curve flexibly along the spine of huge tuna and straighten again, according to the force applied to it.