The Mark of Beauty | Folding Fans 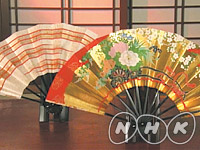 Folding fans have long been used as a tool to keep cool but also as a fine piece of ornament. First introduced around 1,200 years ago in the ancient capital of Kyoto, the original folding fans were said to have been created by binding thin strips of Japanese cypress. The surface, its most important aspect, was embellished with beautiful and elegant paintings produced by artists of the time. These were used by aristocrats in ritual ceremonies and were highly valued ornaments. Japanese folding fans were also extremely popular among European aristocrats in the 18th century.