The Mark of Beauty | Clockwork Dolls 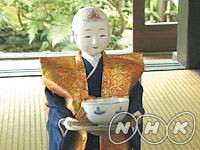 Robots existed since the Edo period (1603-1867), or so to speak. They are clockwork dolls. Displaying sophisticated movements and realistic facial features, they are unique dolls which artisans of the Edo period created using the latest technologies of the time. Some carry tea, while others can skillfully use an ink brush. Based on an elaborate mechanism, these dolls are as real as real can be. This episode introduces clockwork dolls that fully reveal the genius ideas of master artisans.

The Mark of Beauty | Tops 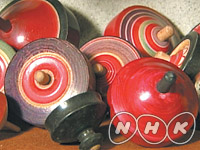 Tops: standing straight up, they spin in an orderly manner. Although tops are one of the many old familiar toys children used to play with 50 years ago, they have also been regarded as lucky charms and used in dramatic performances since ancient times. And with their bright colors, some can also be considered works of art that go beyond the realm of toys. They are the result of the finest skills of craftsmen who infuse these precious toys with local flavor and beauty. This episode delves into the fascinating world of tops.

The attraction of Japanese period films lies in the elegance and dynamism of its sword fighting scenes. From the realistic bits that make people look as though they're actually being cut, to the breathtaking beauty and intensity seen in the split-second execution of skills...
How do these scenes -- that continue to intrigue us -- come to life?
The stage combat master is the choreographer and director of sword fighting scenes. By utilizing a state-of-the-art camera, we close in on the ultimate skills that the stage combat master brings to life through his infinite wisdom and discipline. 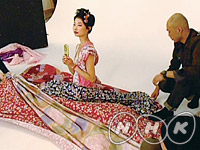 Actors dressed to kill light up the screen and fashion models wearing the latest trends adorn magazine covers. But who makes them look their best? Stylists. Naoyuki Kotaniguchi works as a stylist in a studio of a big city. After two years in the business, he finally has a better understanding of the diversity of the job -- that it's not simply about choosing outfits but that communication with the models and concern for the shops that provide the outfits are also important aspects of the work. This episode takes a look at what makes the job of a stylist so appealing by following Kotaniguchi as he works on a big assignment.