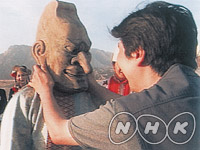 Giant masks from ancient times are stored at Shosoin, a repository in Todaiji Temple and at Horyuji, a temple in Nara. The curious expressions and lavish colors of these masks can only be described as strange and unusual. Who used the masks and for what purpose? The questions prompted by the existence of these masks stir the imagination. With roots in the masque of ancient Greece, gigaku traveled along the Silk Road, picking up aspects of local performing arts as the masked drama journeyed through Asia.

Kakiemon : A Never-ending Journey – Japanese Porcelain with an Enduring Appeal in Europe – 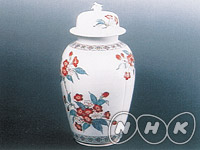 Vivid red-against a seemingly endless white background that exudes a delicate warmth. Kakiemon is an exquisite example of Arita ware, a representative form of Japanese porcelain, that traveled the oceans to Europe in the 17th century, and captured the hearts of the upper classes there and subsequently around the world. 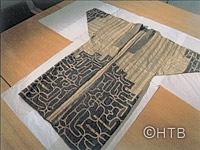 The "Hokkaido Heritage" designation is given to tangible cultural properties and intangible assets selected by Hokkaido citizens as heritages that should be passed on to succeeding generations. Like the UNESCO World Heritage listing, the Hokkaido Heritage designation extends beyond cultural assets to include sites of natural splendor, distinctive cultural traditions, special industries and unique lifestyles. The world is realizing that heritages must not be condemned to historical obscurity, but must be rediscovered again and again, and handed down to each succeeding generation.

One Dance,One Chance – The Masters of Hand Dancing – 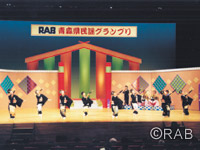 Once a Year, the final round of a very popular and unusual dance contest is held in Aomori Prefecture in northern Japan-the "Te-odori Masters Championship." The unique kind of folk dance called "Te-odori" ( hand dancing )is based on the movements of the Kabuki theater. It developed amongst the rural communities of the region in the 19th century. 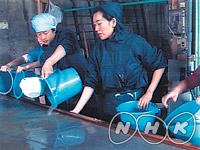 Eriko Horiki(41) is a "washi" designer who has recently been attracting some attention. She first became interested in the beauty of washi art 18 years ago. After apprenticing in the methods of traditional hand-crafted paper in the township of Imadate cho, in Fukui Prefecture, Horiki developed her own technique for producing a giant sheet of washi measuring. Beginning with Kyoto Station, her large works have been exhibited in recent years in busy public spaces such as airports and hotels. Due to its geometric design, the giant washi can appear to change character depending on the lighting. The washi, glowing in the light, can create a wonderful, enchanting space.