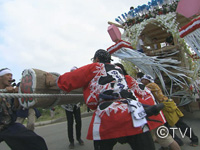 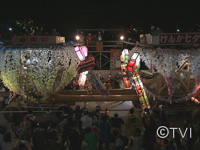 Imaizumi Ward, Kesencho, Rikuzen-Takata, Iwate Prefecture, Japan was a historic town that flourished since the Edo Period, and was home to some 2,000 residents in 550 households. Since the days of old, the connections between houses had been strong, and the town still retained the feel of a collective village community.
Kenka Tanabata, the Float Fighting Festival, has been a tradition here for over 900 years. Four groups from neighboring towns each made their own gorgeously decorated floats, then crashed them together full force in this 'rough and tumble' festival. For the locals it was the most important event of the year, with the townsmen preparing months in advance. People young and old looked forward to the festivities.
Then, on March 11, 2011, the Tohoku earthquake shook the region. A tidal wave over 10 meters high engulfed the town, destroying 99% of the homes. 230 people, some 10% of the local population, lost their lives. Where houses once stood in Imaizumi Ward, now is an empty wasteland. Former residents are now separated, relocated to various temporary housing complexes in outlying towns.
However, despite their daily struggle just to get by after the disaster, the townsmen were determined that the festival be continued. They feared that if the festival were discontinued, the people who had once lived here would forever lose their local spirit.
It will take at least 5 years to lay the groundwork for people to be able to live in the Imaizumi area again. For Imaizumi, the festival is the only remaining emblem of the town now razed to the ground; "Until people can come back and live here again..." On August 7th, 2012, at the site of the former main street, the townsmen recommenced the Kenka Tanabata Festival. They wanted to show everyone how not to give up.

Creating a New World: The Maverick of the IT World 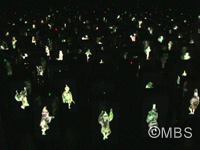 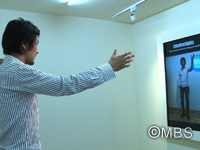 Japan's "soft power" is more than just anime and video games. There is still an enormous amount of cultural resources that remain undeveloped. A pioneer digital creator, Toshiyuki Inoko is brilliantly tapping into these resources. Many call him "Japan's Steve Jobs."
Inoko thinks out of the box and his unique concepts have stirred the curiosity of people from all walks of life. With Japan as his springboard into a new world…he is our guide into the uncharted and limitless digital world. His eyes can already see the shape of the future.
Inoko established an IT venture company, teamLab, in 2001 with friends from college. He conceives various ideas with his exceptional talents. Should they be classified as art or technology? There are no boundaries to his creative style. Take the idea of Japanese letters that turn into 3D images… This one brought home an international award. Other projects include the interior design of a retail store that makes you feel as though you've stepped into a virtual world of video games, and innovative hangers for clothing stores that are the first of its kind. In every genre, Inoko's powerful creations generate excitement and enthusiasm. For Inoko's indispensible team, it is a daily struggle to turn his incredible concepts into tangible works, but each one is dedicated to producing things that are "fun and interesting."
In addition to being a digital creator, Inoko often participates in seminars as a panelist and sometimes gives lectures to university students.. His straightforward manner makes a strong impression on young people. With his unpretentious, unique way of talking, he declares, "I'm just like a fourth-grader." And because he is a grown-up who is still a child at heart, Inoko continues in pursuit of a "joyful world." Here is an intimate look at the uber-cyber creator who challenges the world, armed only with innovative ideas.

The Mark of Beauty | Summer Kimono 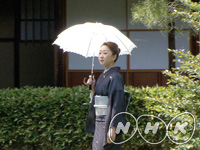 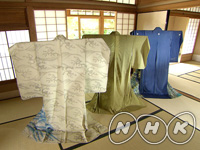 A hot summer day in Japan. A female figure in a kimono holding a parasol in her hand, walking along in a cool, refreshing manner displays a dignified beauty. Because it is a country with such contrasting seasons, there are ways to enjoy the kimono through fabrics, patterns, and accessories that are unique to summer. One of Japan's foremost kimono stylists, Nobuko Ookubo, states of the kimono's appeal, "I see it as the presence of a slender figure, swimming inside a thin garment. It projects elegance and sensuality." Along with avid kimono-lover, actress Riho Makise, we will learn the art of wearing the summer kimono in a stylish manner.

The Mark of Beauty | Okinawan Houses 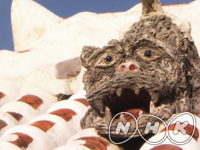 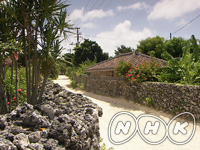 Okinawa. A tropical land abounding with colors and nature. The characteristic scenery comprised of red roof tiles and coral walls of the Okinawan houses is a beauty unique to the land, which never ceases to attract travelers. This breathtaking view was born out of Okinawa's own history which prospered in its location between Japan and China, and its struggle against the harsh climate of heat and typhoons. We will take a detailed look at the red tiled-roofs, eaves, and walls to get a better understanding of the Okinawan aesthetics.

The Mark of Beauty | Nebuta of Aomori 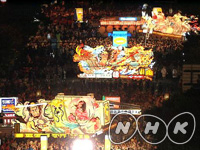 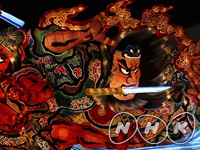 The Nebuta Festival colors the streets of summer in the northeastern Tohoku region of Japan. What draws the attention of all is the brilliant and enormous "Nebuta" with its fierce warrior face, giving it a lively, forceful presence. This power is the secret behind the fascination of Nebuta. Its origins trace back over 300 years, when it started out as a custom to exorcise bad luck by setting a small lantern adrift on a river or ocean. Taking in influences from other parts of the country during a time of land development in the Edo Period (1603-1868), the Nebuta grew to be dazzling and gigantic. We will enjoy three marks of beauty the Nebuta Festival has to offer: three dimensional shaping, black sumi ink, and red of passion.