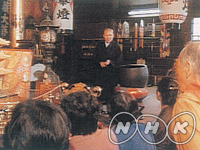 The Buddhist temple in Sekicho in Mie Prefecture has a long history. Dedicated to Jjzo, the popular guardian deity of children and rescuer of souls in torment, this temple may have been built as much as 1200 years ago, and has been in great need of restoration. When Kojun Miyamoto became Chief Priestess twelve years ago, she decided to make the temple one that everyone would be proud of. This is a heartwarming story of what a town can do when people all work together.

The Dance of the Lion 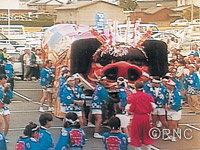 The shrines in Miki in Kagawa Prefecture have all performed the traditional shishi-mai or Lion Dance to drive out evil spirits. The single exception was Hikami Shrine. Then, a local man, Shigeki Kushida, decided to stage a lion dance for the shrine. He made the lion's "head", persuaded a cousin to decorate the fabric "body" of the lion, and drummed up community support. This interesting program shows how people working together can revive an ancient tradition.

I Can Feel the World in My Heart 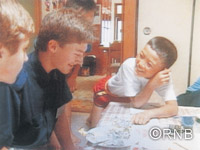 When Ivan and Alexei arrive to stay with his family for three days as part of a visiting Russian junior baseball team, fifth grade student Yoshitsugu suddenly comes face to face with a most contemporary problem: how to communicate with people who speak a completely different language and come from a much different culture with unfamiliar values. How Yoshitsugu learns to bridge the culture gap is the theme of very interesting program with relevance for everyone. 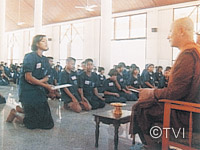 A Boy From Africa – Remember Your Father’s Native Land – 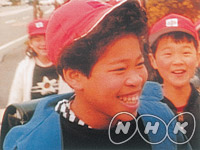 Baru's father is Nigerian; his mother, Japanese. Baru came to Japan to live when he was four. When he was eight, however, his parents decided he should use his spring vacation to visit Nigeria, and here in the land of his African ancestors, reestablish his sense of roots. Baru's diary tells us about life with his Japanese grandparents, and then his life with his parents and younger brother in Nigeria. Nigeria was a lot different from Japan, and things didn't go as expected.